Reprint from The Christian Chronicle

The Christian Chronicle: A conversation with Norris Cole. 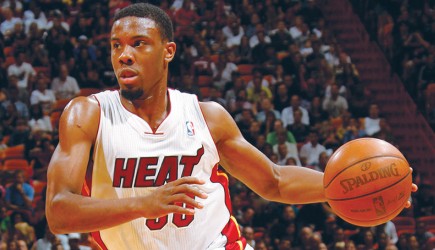 Though they always considered themselves a lively “sports family,” Diane and Norris Cole Sr. never dreamed that their son — Norris G. Cole II — would play in the National Basketball Association.

Such aspirations never were part of the couple’s “grand plan.” What was a part of their plan was their child-rearing strategy, neatly summed up in Proverbs 22:6, “Train up a child in the way he should go, and when he is old, he won’t depart from it.”

As a preschooler, young Norris “played church” with his sister and cousins. Since he was the only boy, he did all the song leading, praying and preaching. The girls were his congregation.

When he began playing basketball at age 3, his parents explained to coaches that if there were games or practices on Sunday or Wednesday night, Norris would either need to leave early or not be able to participate because of services at the Webster Street Church of Christ in Dayton, Ohio. There would be no exceptions.
– See more at: http://www.christianchronicle.org/article2159903~A_conversation_with_Norris_Cole#sthash.t9LjunO4.dpuf

Visit the Beltway Church of Christ, 6000 Davis Blvd. Camp Springs, MD where you will be our honored guest.

View all posts by c85williams